In 2018, Arab.AMP officially launched from its home in Oakland, California. Arab.AMP is a platform for the work of Arab Experimentalists working in the Arab world and its diasporas. My fluid definition of Arab Experimentalism is currently: a field that accumulates regional and diasporic realities and futures through transgressive arts practices. Arab.AMP celebrates the plurality of Arab voices operating in futurism, the avant-garde and experimental practices. This nomadic platform works with partnering organizations to support its tours, commission and discourse. I am delighted to be working with Fusebox Festival to highlight the work of multi-instrumentalist Dirar Kalash, a Palestinian artist currently working in Europe. Dirar and I performed together at the Bimhuis (Amsterdam) and the After the last sky – Palestine International Festival in Berlin. During these collaborations, I experienced his musical power behind the saxophone, piano, electronics, and visual media. The spirit of his work is downright tangible – full of fire, full of promise. Please enjoy our recent exchange about culture, content and experimentalism. — Leyya Mona Tawil of Arab.AMP 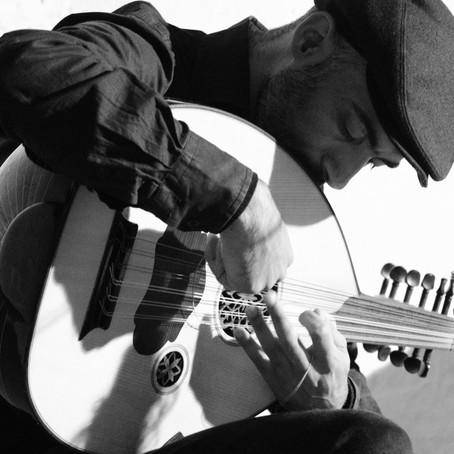 Leyya Mona Tawil: Dirar Kalash… its so great to be in conversation with you. Let’s start with describing your sonic territory. What instruments, of your many, are you playing most these days and why?

Dirar Kalash:   My sonic territory is sound itself, best said, but the logics vary in proportions from the sonic to the musical proper, from touching the sounds to thinking the sound in all possible relations, that includes composition, improvisation, and other sonic practices which could be called ‘sound design’ or ‘sound sculpturing’ – that also includes playing different instruments, often in very different approaches to the same instrument, depending on the musical or sonic context.   Performance-wise i’m playing the oud most often, for different reasons but mainly it’s the easiest to travel with, and i can perform with it in quite many different situations, solo and in groups or duos. but still often i’m carrying a second instrument if i can – mostly alto or soprano saxophone, and if the venue has got a piano, i play that as well.

LMT: Your masters degree is in Sonology. Can you describe this term in relation to your work? What is your current research in music and/or transdisciplinary practices?

DK: My studies at the Institute of Sonology in the Hague involved both my approaches to instrumental music, specifically maqam music and to electronic and electro-acoustic music. i don’t see those as different worlds, but the starting point is sound itself within those somehow different contexts, understanding the sound makes possible a better understanding of those supposedly different musical contexts and the relations between them, in analysis, performance, composition, and improvisation.

LMT: I consider you one of the foremost artists in the field or Arab Experimentalism and the Arab Avant Garde. I would love to hear your thoughts about the field from the perspective of a Palestinian who is navigating life as an experimental artist within the Arab region, and in the European diaspora.

DK: What i can say with regards to my practices from this point of view, is that from my perspective it’s about taking advantage of the possibility to move, in the most physical and concrete way – that is jumping from one city to the next, from one concert to the next. music and sound is motion, and such is the musicians mind, europe provides that possibility to move, at least affordably and easily.  with regards to experimentation, i don’t see myself much as an experimental music as much as i see myself as somebody who had absorbed so much sounds and music, which in my opinion do require an involvement beyond the culturally reduced listening which is often one directional — for example in the case of the so called classical arabic music, i never relate to that only through the “classical” construct, there is so much to listen to sonically there, beyond the mere melodies and rhythms, that attracts me, and that makes me hear it differently, and thus approaching the theories behind it differently as well.

LMT: Do you find yourself gravitating towards or away from Arab cultural reference points in your work? How conscious are those choices anyway, given the role of inherency and intuition in improvisation?

DK: There is no single cultural reference, not even with the oud, some people had commented that i play in an ‘Iraqi’ , some more in a ‘Persian’ way, others ‘Yemeni’ way, and some others say in a ‘jazzy’ way. this allows me to say that all of them are right and all of them are wrong, all of those different approaches were always references to each other, it’s about musical choices, not cultural.  there are other situations where a certain melody is constructed in a certain manner, as it is the case with Palestinian traditional songs, i sometimes refer to those whether during improvisation or as the main basis for a certain composition where i’m interested in that reference, not only musically, but for the statement itself.   so to make it clear – the reference isn’t in the music itself, it’s more in the context, and the choices are made accordingly.  as for current research: research proper i’m involved with researching complex musical structures both in terms of instrumentation and (musical) organization, there’s a lot to say on this topic, but to make the story short, it is about the transformations in sound and musical ideas which happen in large pieces and / or in long form or contexts, focusing mostly on arabic musical traditions from the 19th century.

LMT: What or who has caught your attention lately in the field, and what is next for you?

DK:   i think there’s a lot happening recently, and a more broad awareness of musical possibilities is coming to light – the ‘Beirut’ scene for example is expanding that it’s hard to call it the ‘Beirut’ free improv scene, somehow it’s the most active in the arab world but i think that’s Beirut. even in pop music the most active acts are coming from there. but that doesn’t mean nothing is happening elsewhere of course.  of the most recent musical approaches i’ve seen and heard lately i think it’s worthy to mention several different projects which have in common the will to expand the musical possibilities beyond the simplistic ‘west-east’ approaches, which i think is a response to orientalism and “self-orientalism” at once, even if it’s not stated or thought as such by the musicians .. namely Jerusalem in my heart, from Lebanon /Montreal, Hassan Al Hujairi from Bahrain, Khayam Al-Lamy from Iraq/Syria, all of which are working with electronics and traditional music and instruments at the same time beyond simply ‘experimenting,’ and in a very interesting way. as for the present, live performances are keeping me busy, besides several studio projects which involve setups that i can’t really travel with, like analog electronic equipment for example. and as for the future, i’m looking forward to have some time to work on large ensemble compositions.

Multi-instrumentalist and composer Dirar Kalash creates live performances that combine text, sound, image, video and movement. Regularly using free and open source software in the field of real time audio, video and image processing, his work is based on everyday life as a phenomenon, which is then subjected to live processing, composition and decomposition in order to transcend time and matter to a ritualistic live performance. He holds a Masters in Sonology from the Institute of Sonology, Royal Conservatory of The Hague and has toured his work throughout Europe and the Arab world.

Leyya Mona Tawil is an artist, curator and cultural activist. She has a 23-year record of interdisciplinary performance work that has toured the US, Russia, Europe and the Arab world. She is a 2018 Saari Fellow (Finland) and an AIRspace Artist at Abrons Arts Center (NYC). Tawil is the director of DANCE ELIXIR 501c3, TAC: Temescal Art Center (Oakland) and Arab.AMP – a nomadic platform for the work of Arab Experimentalists.