Christie Blizard is a conceptual artist working primarily in performance, sculpture, and painting. Her work has been featured in Hyperallergic, Art News, Art in America, NY Arts Magazine, and Blouin Artinfo. Christie has participated in residencies at the MacDowell Artist Colony, Centraltrak Artist Residency through UT Dallas, and SIM Residency in Reykjavik, Iceland. She has been in exhibitions curated by Mel Chin, Michael Duncan, Veronica Roberts, Virginia Rutledge, and Franklin Sirmans. She was a recent resident at Artpace, curated by Yoshua Okón and was a finalist for the ARTMATTERS grant in 2017. In her new work The Brave Human World, Blizard has immersed herself in electronic dance music and DJ culture and created a site-specific performance in the parking lot of the Kyle flea market. If that’s not pomo enough…a puppet version of famed French theorist Jean-Francois Lyotard will be her stage partner. Christie will be in residence at Dirty Dark Place for the entire month of April as part of the programming for the 2018 Backdoor Biennial, and two of her performances of The Brave Human World were presented during Fusebox 2018. Fusebox curators Betelhem Makonnen and Anna Gallagher-Ross spoke to Christie over the phone about what drew her to electronic dance music, making work outside arts institutions, and how her work reframes the everyday. 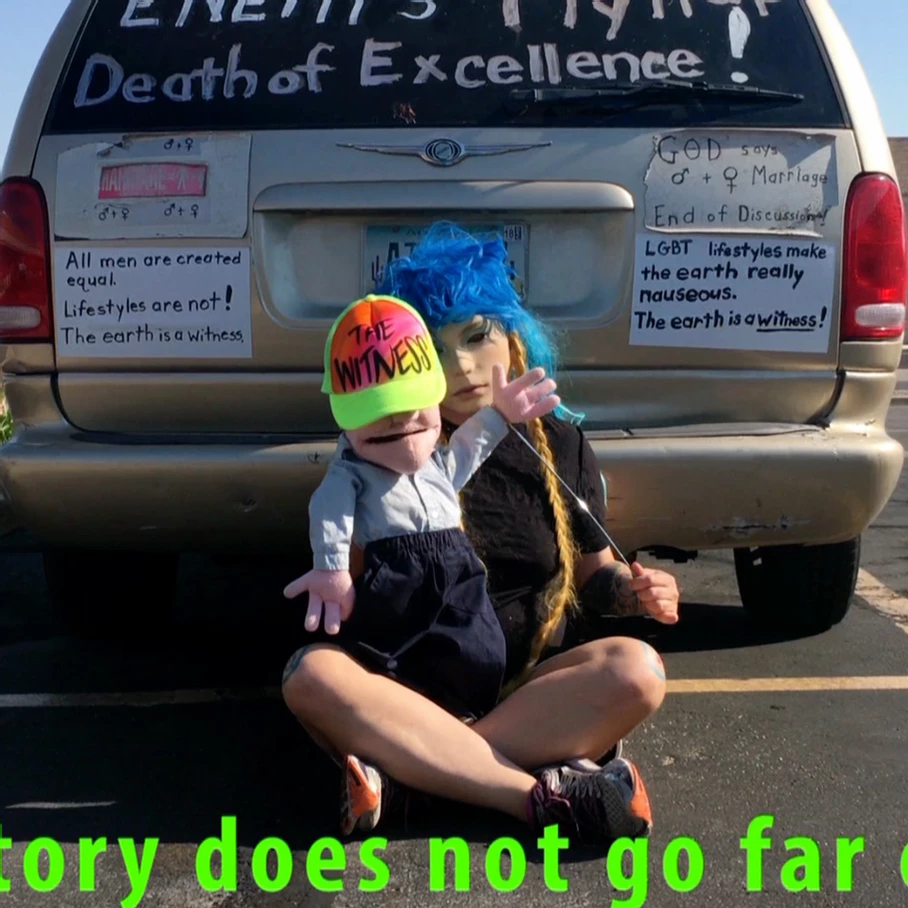 Anna Gallagher-Ross: Can you tell us about The Brave Human World?

Christie Blizard: I’ve got these three little parrots and I don’t know you can hear them but they might scream the whole time. They don’t like phone calls.

The project has several components, but the main component is that I converted my boyfriends Pontiac Grand Am into a Lamborghini so its like a dented Grand Am. We got a holographic paint job and lambo doors, so its like KITT from Knight Rider (1982-86) meets DeLorean from Back to the Future (1985), but its kind of very desperate and has Whataburger cups in it. I’ve been taking it to various EDM events, and Burning Man events, and I’ve been loading it in and performing as a kind of Anroid called Elle Fanning, who is Dakota Fanning’s little sister. I also commissioned a professional puppeteer to make a puppet version of the French post-structuralist Jean Lyotard, who is a real advocate for the avant-garde artists who he sees as these revolutionary figures, and so I’ve made this puppet version of him that sort of dances with the crowd.

CB: And so a lot of it is based on David Bowie in Labyrinth (1986). That kind of aesthetic. It’s punk rock-ish but with puppets. And so that was the ArtPace exhibition I did recently. We had the car and this huge sound system and there were undercarriage lights, and I made a video of all of our EDM excursions with cut up text from Lyotard that try and predict the future. And since then, the way the projects developed is that for the last seven months or so, I’ve been working diligently at learning how to DJ, and so what we want to do is go to all these events and start our own sound camp and I’m working on creating Youtube videos so we can create some kind of following. So Lyotard and I are going to DJ and try to control the crowds.

BM: It’s just so fantastic that you brought Lyotard to EDM music and DJing.

CB: I know! I love Burning Man and the first time I went was the same summer I was introduced to The inhuman (1991), which is so dense. And I was like “There is such a connection here!” This connection between Lyotard’s writing on how to have an idea outside of a body, and then what happens at these raves, and it seemed like it was meant to be. So currently I am working on Youtube videos and trying to create momentum with the millennials.

AGR: What drew you to EDM?

CB: I think part of it was I lived in West Texas for like six years and its incredibly isolated out there, and I’m from rural Indiana, and I’ve always been a freak , but I’ve always been in isolation. And especially living in West Texas, I mean, there are great people out there, but you are hours from anything. And one of my best friends, who I had been friends with since kindergarten, and who lives in San Francisco, had been going to Burning Man, and he was like “Oh my god, you have to go,” and it totally changed my life. I didn’t know that this thing existed in the world. And I know all the criticisms of it too, but there is something there that is greater than the sum of its parts, it’s not art per say, its like a phenomenon. That was the summer of 2014, and I was reading Lyotard, and I realized that there was something amazing there. I don’t know if Lyotard would have liked Burning Man, but it was literally the embodiment of some of his ideas. So it kind of all happened at once.

AGR: And what is it like learning to DJ?

CB: I had tried to learn classical music as an adult so I had a bit of musical background, but its been really amazing. The one thing I try to focus on with the music, is to create a kind of voice that comes through the kind of logarithms, and so that to me is when I really connect. The whole idea of these logarithms, these mathematical structures that create these organic bodies, and the weird voices that come out of the beats, that’s so interesting to me. I don’t know if that’s considered psychedelic trance music, but that’s kind of the sub genre that I’d be considered a part of. It’s really just like trying to listen and sculpt the sound in a way, and then trying to evoke a kind of alien voice, that comes through these patterns. I’ve been working three to ten hours a day trying to get it under control.

BM: How are you doing that? With DJ friends or are you going out in the woods alone?

CB: I do have a really good friend who is a musician and has been helping me. And I use software so I am able to do it just in my apartment and work on various tracks and patterns and samples. It’s been really fun!

BM: You are making me think of the history of rave culture itself. It provides the opportunity for a revolution, for subversion, which I think precedes Burning Man. These kids going out and creating this music and coming together. And that paired with Lyotard – it’s just brilliant.

CB: I think that’s my contribution to it. I’m trying to give it a criticality. It’s about the body, and the body is a kind of revolution.

AGR: I really appreciate how you are helping us view this already quite performative experience in a new light. Could you talk a bit about how your work reframes these everyday practices?

CB: I’m interested in talking to art audiences, but I’m also interested in what art can give someone who isn’t expecting to have it — a sublime experience. That can happen at any moment. I’m interested in these regional Burning Man events, but I also did a project the The Today Show, and my audience for that was stay at home moms, and I was trying to get them to have a poetic experience while watching television. I think art is ahead of culture, outside of culture, but I think its really important to bridge that gap and create something that’s really accessible, and funny, and also has layers to it that can work afterwards. That was a goal of mine from quite early on. I love people like David Bowie, and Bob Dylan, and Neil Young, and the Beatles, who tried to change mainstream culture.

AGR: Are you excited about performing in the Kyle flea market parking lot?

CB: I’m pretty excited. I think the crowd will be pretty freaked out. I’ll have to see about the noise and the number of speakers. The reverb is going to be pretty intense. But it will be really fun.

BM: It seems like exactly what you were describing, which is creating an intersection of people or crowds. Kind of beyond the reaches of institutions or art spaces.

CB: And a lot of this work came out of me trying to take matters into my own hands, like not waiting for museums to catch up. When I went to Burning Man in 2014, it took three years for the idea to really develop, and what I was most excited about was this longevity and inexhaustiveness of this idea: it could keep going. What was fascinating was how the DJs totally control the audiences. Some of them are real shamans, like you are a really transported. I was just standing there bewildered, “this is so crazy,” I thought. “I want to learn how to do that.”

BM: I know that you are also a professor, how does teaching inform your work, and vice versa?

CB: I love teaching and I feel like its an extension of being an artist, and being a learner, and so I try to approach teaching as that. How can my students be life long learners, and how can I be a life long learner? It’s not really about a style, it’s about a curiosity and drive and desire, and so I try to frame all my teaching around that, so that they don’t settle on anything. That’s the the thing I think art and philosophy can give people. Like how do you ask hard questions? Now its even more important to make something political, to make, even if its like an abstract painting, a gesture of resistance.

Image courtesy of the artist.