Kirk Lynn on The Cold Record

Kirk Lynn is an award-winning playwright, novelist, and screenwriter. As one of five Artistic Directors of the Rude Mechs theatre collective, Kirk has written and adapted over twenty plays, including the critically acclaimed Lipstick Traces, The Method Gun, and, most recently, Not Every Mountain, which will premiere this summer at the Guthrie Theater in Minneapolis. His current solo projects include The Lamp Is the Moon, a commission for the Seattle Children’s Theater to premiere in April 2018, and A Plan and not Quite Enough Time, commissioned by UT Theater and Dance and Texas Performing Arts to premiere in 2019 as part of Leonard Bernstein’s centenary celebration. Kirk sat down with Fusebox curators Anna Gallagher-Ross and Betelhem Makonnen to talk about his intimate and punk rock “tape play” The Cold Record, which will premiere at the Fusebox Festival 2018. 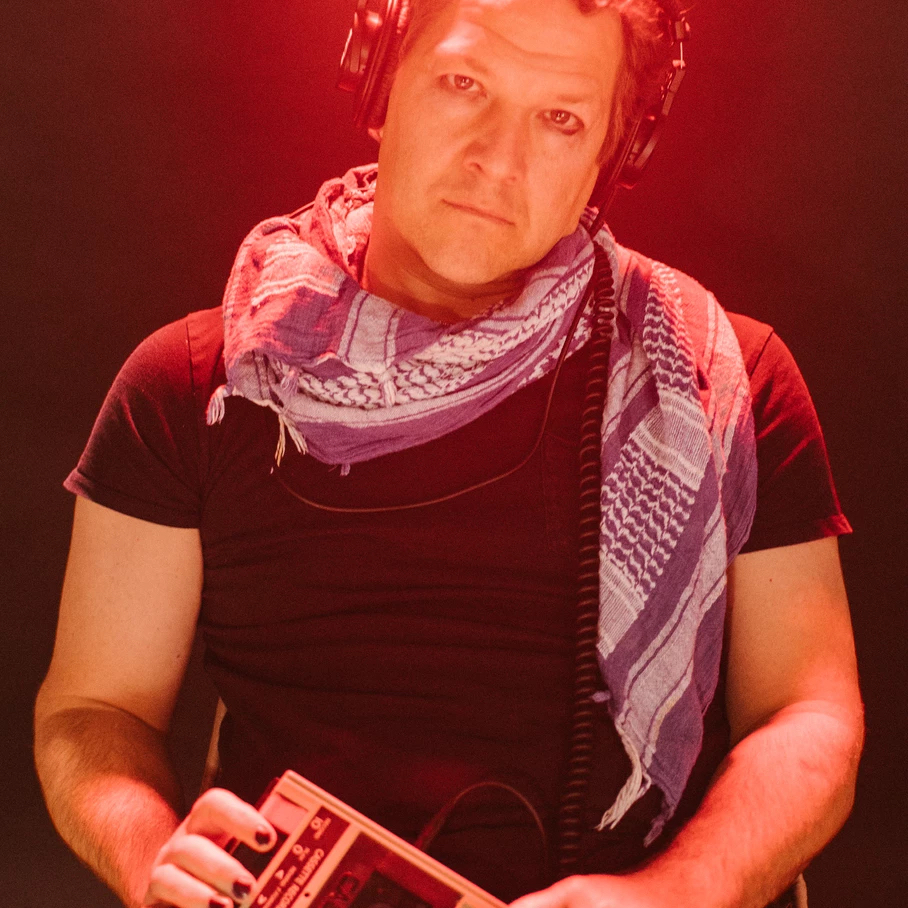 Anna Gallagher-Ross: How did The Cold Record come about?

Kirk Lynn: I remember first writing a text that was highly repetitious; it was all about a little boy who was collapsing over and over again and he liked this collapse. I remember sharing work with grad students and reading this text out loud. I had them all sit close and I just sat there and read it as quickly as I could. And I realized there was something about the rhythm of the text that I really liked, the rhythm of the repetition, going a little too fast. So I didn’t have a narrative first, I had a style, and over time this narrative emerged about a kid setting the record for number of days home from school with a fever. When I was a kid I read this book How to Eat Fried Worms and there’s something about that really juvenile story of doing a task that seemed ridiculous, and gaming the system, and so a lot of that was in the machine. And this story seemed to sync up with the style and the rhythm.

Myself and the Rude Mechs are also obsessed with tape recorder plays…and a while back I made a piece with Paul Lazar of Big Dance Theatre; Melanie Joseph of the Foundry, who was the producer; Maggie from RadioHole; and this magician Steve Cuiffo, and one of the things Paul was obsessed with was recording the play-text on audio and getting the actors to recite what they were hearing. He was really into the comedian Lenny Bruce’s rhythm and banter, the way Lenny spoke was so singular, and in this piece Lenny Bruce at one point comes back from the dead and has this monologue, which was so much fun. So maybe I got into this method through Paul.

I am really excited about the idea that I can put this show in a bag and take it anywhere. I don’t need a theatre or a company, it just travels in one bag, which seems so human and so nice. It seems like a good reaction to some of the largeness of the world these days.

I really like the idea of asking people to share punk rock songs that matter to them. Fifty- percent of the show is people talking and sharing their thoughts. It’s been fun to have this thing cook so slowly. I’m also thinking there could be a string of Christmas lights which allow me to do really simple lighting cues — on and off, you know? And then a third tape recorder that just plays sound effects. Like foley. Either way, the whole theatre is in the bag. And I’ve fallen in love with one size and shape of recorder: its small, grey, and rectangular. My sister used to have one. When we were kids she would tape record episodes of M*A*S*H, like just audio record while the TV played, and then when we all had to go to bed, she would listen to these episodes. She had a huge set of these episodes. When you’ve watched the show enough, you know what’s happening, what it looks like.

BM: She was staging it in her mind. That’s great.

KL: Totally. I’d love to find those cassettes. The first time I met music was on cassette. My brother got Foreigner 4, Journey’s Escape, and REO Speed Wagon’s Hi Infidelity — and I remember falling in love with those three tapes. Do you remember trying to capture things from the radio onto tape?

KL: When I made a mix tape, I would take all our old kids records from Disney and in between punk rock songs or love songs, I’d find these great little pieces of Disney dialogue to insert, totally independent—it would be like Baloo the bear going “Looks yummy!” [Laughter] It took so much time.

BM: And such a labor!

AGR: There’s an art to the mix tape. Could you talk a bit about your, and the Rude Mechs, other forays into tape-making?

KL: Some of it is a conscious reaction by the Rude Mechs towards losing our space, and thinking about how to make theatre that is portable and sharable in ways that don’t require a theatre. We made a whole play called The Replacement Tapes, which is a tape recorder that you mail out to people, along with these instructions that tell people to put on these headphones, press play, and then it basically talks you through the rules: “recite what you hear, and you’ll become these characters, and when you hear the bell, you’ll switch performers.” And so the audience ends up performing the entire play. Together you tell this story, that’s both based on an O. Henry short story, “The Duplicity of Hargraves,” and also the story of the Women’s Auxiliary Army Corps. And so we experimented with that, and now we are mailing it out. I like to say it’s on tour. We’re getting feedback from different people everywhere who are doing it. I have this dream of putting together a film of all the different people all over the world who’ve done it.

We played around with a same concept for A Christmas Carol, and that one has a lot of props. There’s instructions about how to make a rum punch, or a way you can make it snow in the living room. And as you are performing all these voices, you’re also interacting with a lot of physical objects, and it’s been fun to experiment with what you can do with this medium. One of the ghosts doesn’t speak at all, they just nod and point, so there’s a lot of physical direction as well.

And there’s another tape thing I like to do: I recently attended a production of Twelfth Night which I didn’t particularly care for, and so myself and Peter Stopschinski, made an audio recording which is basically Mystery Science Theatre but for Twelfth Night. You can go to any production of Twelfth Night and sit down and put in earbuds, and as they go scene-by-scene, you can advance the to line up with the action, but the audio describes other things you could be looking for. (You can find it here!) When you’re producing a play that’s not a world premier, in some ways you’ve ceded this field of battle to the audience, that we all know what’s going to happen, and so we can play with it in different ways.

So this felt like a new and fun way to collaborate. Traditional theatre can sometimes be an oppressive art form. “You have to be quiet, and I’m going to tell you what I think, and don’t talk at all, and turn off your phone, and don’t be distracted, and I have so much important shit to tell you!” I’m interested in making art that asks people to share their thoughts about the ways punk rock is related to their lives, or plays that ask questions, or tape plays where audience can themselves become the performers. I don’t imagine I’ll ever stop making these.

BM: Do you call this this fixing Twelfth Night?

KL: Might be hacking! You can see that play straight, or you can see it this way, in the way that Kirk and the Rude Mechs wanted to fuck with it, or you can make your own version. I once heard Mark Russell describe The Wooster Group as the font in which contemporary theatre is printed. That’s such a great way of thinking. In learning about theatre, students are taught Twelfth Night or Death of a Salesman, they’re taught to think that all plays are printed in an old font, and it’s a good font and it works when it works but its not the ONLY font.