Lindsey Taylor on Search for Flame/Jupiter

Lindsey Taylor is a dancer, choreographer, and visual artist based in Austin, TX. She began studying at the age of five, and went on to earn a BFA in Dance from the University of Texas. For the past decade Lindsey has created work with the award-winning interpretive dance trio Little Stolen Moments and has collaborated with multi-disciplinary group, Total Unicorn, as well as Sheep Army/Elsewhere Dance Theater, Thor & Friends, among others. In 2016, Lindsey was named Best Dancer by the Austin Chronicle Reader’s Poll. Fusebox curators Anna Gallagher-Ross and Betelhem Makonnen sat down with Lindsey early in her creation process to talk about her dance in two acts Search for Flame / Jupiter, premiering at Fusebox 2018, and what inspired her to make this glorious mash-up of genre and epoch. 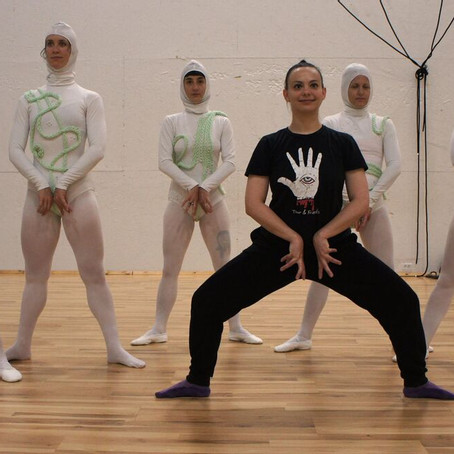 Anna Gallagher-Ross: Could you tell us about the origins of Search for Flame/Jupiter?

Lindsey Taylor: I made the second act, Jupiter, three years ago. I’m a huge fan of sci-fi, and I don’t think there’s enough sci-fi in dance, so it seemed like the obvious thing to do. I was really inspired by electronic remakes of classical songs, — in particular the Isao Tomita 1976 version of Holst’s Jupiter (1918). I also love the original — I’m a huge Holst The Planets fan girl. [Laughter] So I took that music and ran with it. And now I’m excited to have the opportunity to restage it.

The new act, Search for Flame, is based on one of my favorite films, Quest for Fire (1981). It’s the opening act of the show. The entire piece is short, twenty minutes in total, so the first part with the cave people is basically a twelve-minute condensed version of Quest for Fire. It’s a classic story of these guys who find fire, they think its alive, they accidentally get it wet, then they have to go find it again….

LT: If it’s not that its something else! I decided to juxtapose the two because, well I’m sort of stealing from 2001: A Space Odyssey (1968). We have the cave men element and then the second part is set in the future in space. And there’s also some gender stuff, because in the cave section it will be three leading men, and then in the Jupiter future, it’s only women. And the men are these dummies who can’t keep the fire going. They have to be taught by a woman how to find fire.

BM: Can you talk about the music in the second act?

AGR: Lately, Bete, Ron, and I been talking a lot about time travel and I love that you imagined the future piece before the past piece, collapsing time.

AGR: Totally. And what drew you to Quest for Fire?

lT: The first time I saw it I thought: I want to make this into a dance. It’s so ripe with theatricality. There’s no dialogue in it whatsoever.

LT: Actually they did have a language coach on set because they do make sounds but not language we know.

BM: Do your works tend to pull from popular culture?

LT: Yeah. For a long time I had a trio called Little Stolen Moments — we went strong for ten years — and we did short pieces, and most of them were inspired by something in popular culture. We weren’t called Little Stolen Moments for nothing. We stole moments, our works were original but also everything came from seeing a movie or a cartoon. We’d respond to it, appropriate it. In my work, I’m usually inspired by music. I don’t feel like I need a crazy dream or vision or anything. The music just tells me what I need to know. I also like to work pretty linearly. I just put the song on and then come up with a story of the piece in my mind of what’s going to happen, and then I’ll take some notes and then just get into the studio. Humor is also a large part of my choreography. Dance is hilarious! How weird can I move my body around?

AGR: Any attempt to communicate often winds up being funny.

LT: Yes! And so in the film there’s this moment when they discover laughter for the first time. It’s definitely going to be featured in the dance. Someone drops a branch on someone’s head or something, and they have this moment of enlightenment together; they didn’t’ know that they could laugh or where it came from.

AGR: Can you talk about the many things you make and do in addition to dance, and all the great collaborations you’re a part of?

LT: I’ve always been a fan of visual art, and I’ve been doing it since I was a little kid. I don’t have formal art training but I’ve been drawing my whole life. My parents used to work in the printing business so I grew up around ink and paper, and that was what I always knew how to do. As the years have gone on, I realized that I needed more than dance as a creative outlet because my body hurts. So I draw, I paint, and I collaborate with Stephen Fishman, who is an animator. He is creating the animated backdrops for both dances, as well as some props.

AGR: How do you and Stephen work together exactly? Does he come into the process early on?

LT: This new dance is one of the most narrative that I’ve made. So I really can break it down for Stephen and say “At thirty seconds this character does this,” as opposed to it being pure choreography. So I tell him, “this needs to go here,” I give him reference points, “this needs to look like this old movie style,” and beyond that, he takes it and runs with it. He knows what he’s doing.

BM: Are you a fast worker or does it take you a long time to make a work?

LT: I came up with the idea for this dance at least a year ago, maybe longer. It came to me while listening to Rite of Spring and visualizing what could happen. So I’ve had it in my mind forever and when that happens the piece becomes clearer and clearer over time. I haven’t yet had a chance to get into the studio yet, and you have to time that very delicately, because if you bring people in too early, and spread out rehearsals too much, once a week or every two weeks, people lose momentum. I need to have a chunk of time where we’re all immersed. We’re looking at three months of rehearsal, where we might begin slow but then it will ramp up very quickly. But when I’m working in other mediums, I work differently. Sometimes I do needlepoint pieces and I love how slow that is, you just zone out on it and you are making slow progress but you see it coming along. I do have a really high tolerance for tedium. I grew up doing ballet, so I do love process a lot. I’m not just trying to jump to the finished product at all, but the thing with this show is its been jumping out of my brain for so long that I’m just ready to get in there.

BM: Who are the people who are going to work with you? Are they members of your collective?

AGR: Are you performing?

LT: Yes I am. For a while I was really trying not to. It’s a challenge to choreograph a piece and also be in it. You can’t see the work from the outside, you know, and so I really relish the times I can make a piece where I have enough resources just to choreograph and hire a cast of dancers and be the one on the outside making the magic happen. But usually due to various constraints, I somehow end up in the piece. In one respect, I like to do it because I know that I’m doing it exactly as it was envisioned. As a choreographer, I make dance for my own body, and though it works on other bodies too, I sometimes want people to see where it came from physically.

AGR: Where did you grow up? How did you come to dance?

LT: I grew up in San Angelo, Texas, which is a fairly small town in West Texas. I started doing ballet when I was five and I pretty much studied ballet exclusively until I was eighteen, and at that point I moved to Austin and went to college at University of Texas at Austin, where I majored in dance. UT was where I was introduced to modern dance, and at first I hated it because I was really a ballet purist, but the older I got, the more I wanted to carve my own path. I realized I had different ideas about dance. I’ve worked for lots of dance companies and still do, but the thing I love most is choreography. I’m also a contrarian, so I’m always trying to push back on whatever is popular. With this piece, I felt like I was not seeing much narrative work in modern dance. I really love old ballets that tell a story, so that’s what I’m trying to do, but I’m telling Quest for Fire, instead of Swan Lake. And though I studied post-modern dance, the technique I use is quite classical — my ballet background finds its way in. A lot of my work doesn’t look like ballet but then sometimes you’ll see someone do a beautiful arabesque because why not?