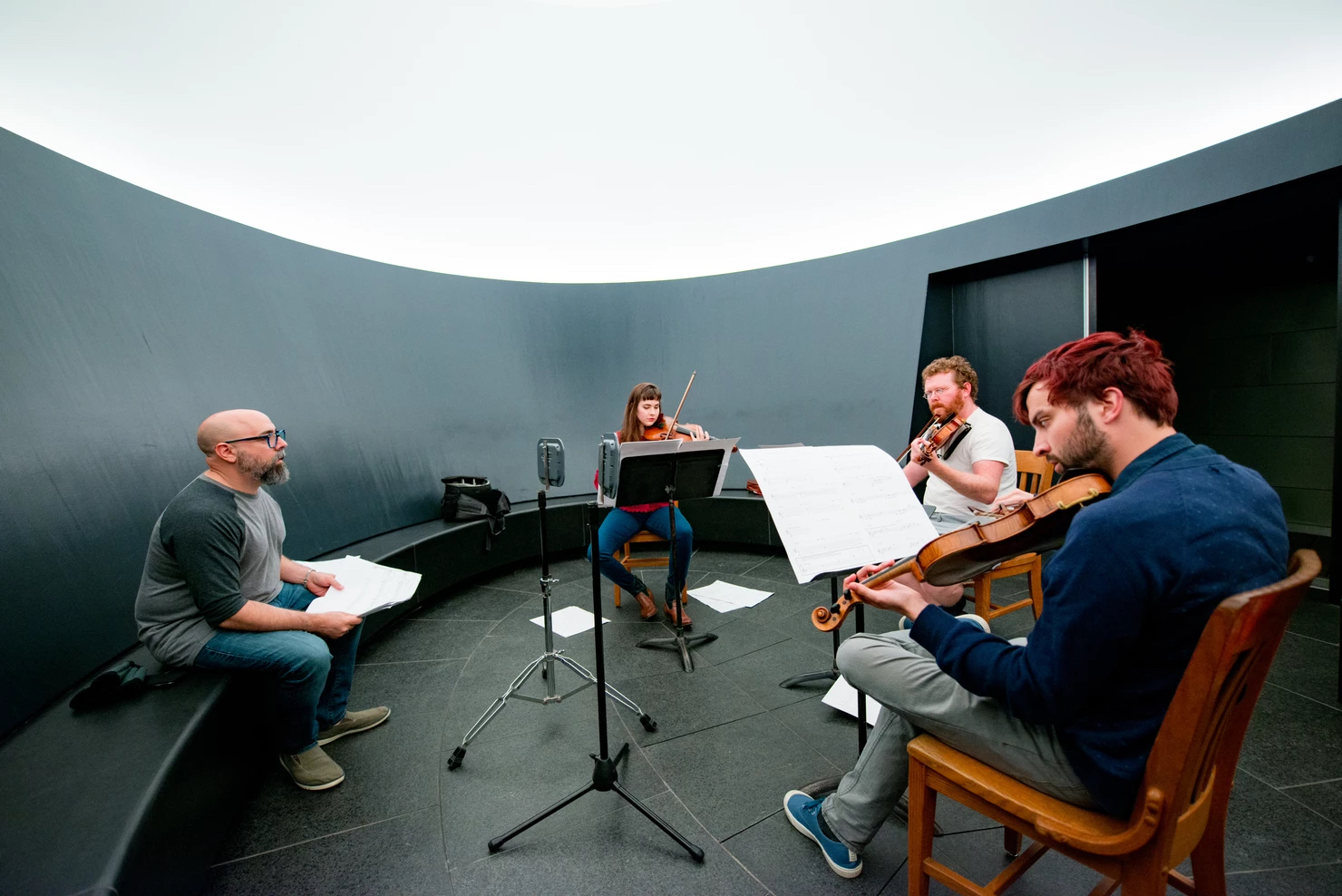 Founded in 2001, The Austin New Music Co-op (NMC) is a diverse collective of composers and performers dedicated to promoting awareness and understanding of new music. The NMC has presented over thirty concerts including works by composer Arnold Dreyblatt, a realization of John Cage’s Songbooks, music for the extinct instruments of Luigi Russolo, Pauline Oliveros’ Four Meditations for Orchestra (with the composer in attendance), a three-day series of the works of the New York School, and Terry Riley’s In C. NMC’s latest project New Music for SkySpace is a musical response to artist James Turrell’s public art installation The Color Inside (2013) located on the roof of UT Austin’s Student Union Building. The installation is an observatory where visitors view the sky through an opening in the ceiling called an oculus and framed by an undulating sequence of colored light that accompany the progression of the sunrise and sunset. New Music for Skyspace is a site-specific musical performance for three violins in three parts and takes place inside the Turrell installation during the light sequence. NMC members and composers Andrew Stoltz, Brent Fariss, and Travis Weller sat down with Fusebox curators Betelhem Makonnen and Anna Gallagher-Ross to discuss their experience creating New Music for SkySpace, which will be presented at the 2018 Fusebox Festival.

Anna Gallagher-Ross: Could you three talk about your relationship to the Turrell installation? What drew you to it initially? How did this composition come about?

Travis Weller: We’re all really into experiential art. The kind of artwork that Skyspace is, fits aesthetically with the way our music works, so they are made for each other in a way.

Andrew Stoltz: Place and sound, for all of us, are important. As composers and musicians, we are visually driven, site-driven. Both Travis and I dabble in photography. I draw my ideas from the places I am in, and so this project was a perfect fit.

Brent Fariss: I think we all saw The Color Inside first separately and thought the same thing: it would be really cool to put music in there. And then it became a problem-solving thing: in such a small space, what could we do? What instruments could we use?

TW: And it sounds so interesting in there—

BF: —the reverb in there is amazing, the structure is like a silo.

AS: You can put your head to one side of the wall and whisper and the sound travels around to the other side. From an acoustical standpoint, it’s really interesting. I’d love to record there but being outside, it’s also noisy.

TW: We were interested in recording this piece inside the installation but at some point we realized it would be too difficult because of all the environmental sounds. One time there was a band playing out in front of the Gregory Gym, just below the installation and so that evening during our concert that was all we could hear. I went out there and I was like “Hey, I’ve got forty dollars cash for anyone who can shut this down between this time and this time.”

AS: Some of the environmental sounds were welcome, though. On the third night we performed it rained, and by the time my piece started it had stopped, but there was water dripping all around the oculus and you could hear it in the piece — it was awesome. No one was uncomfortably soaked, it just was a cool sound effect.

AGR: Your piece, like the installation is experiential, it’s interacting with the environment.

AS: Yeah. And we like to embrace that as much as we can. But my composition is very spare and naked and so it’s a tricky balance: achieving the right ratio of the music and the environment. And for the recording, we don’t want fixed sounds from the environment included because the recording will be available for people to listen to as they encounter the installation, and so we want a clean recording upon which whatever environmental sounds are particular to their experience can be layered.

BF: There are a lot of silences in the piece, and these make room for other sounds happening around us: wind or airplanes or whatever. One time a cannon went off!

TW: We’ve got bell towers going off every 15 minutes!

AS: You timed that with your piece, didn’t you Brent?

BF: The clock would ring, the musicians would pause, and then they would keep going. We knew the exact times. It became part of the composition.

AS: We’re writing music for a space with so few people in it, so you can write these tiny, small little things and know that the audience will hear them. A lot of that would get swallowed up in other venues.

TW: It’s the equivalent of having the entire audience on stage with us.

BM: How about the light? You mentioned that the light was a big part of the composition?

TW: Since it’s free and open to the public, we had the opportunity to visit the Skyspace a number of times, individually and together. Each of our processes is different so in advance we settled on who was going to do what part of the sequence.

I took detailed notes and photos of what was going on inside the installation, in terms of how the light works. I realized that it is not just about the color of the light, but it’s also about the different elements: you have the LED’s which are casting a particular hue on the rim of the oculus, but then you also have the color of the sky which is different depending on whether it’s cloudy or clear. And sometimes the sky is not even, but more more active and changing rapidly and sometimes it appears to not be changing at all. I wouldn’t call our compositions a soundtrack approach, like writing a score for a film, but there were aspects that were similar where you are considering the visual experience and how to make the composition work in concert with it.

AS: Yes. The pacing is different. Different times of day will create more contrast than others. There is a drama to how fast things change. I remember being surprised by how the sky just slid into blackness, and how fast that seemed to happen. My section was real slow — it’s sort of like the time of day where you aren’t noticing the change unless you are sitting there and paying attention. You’re thinking: I’ve got two hours to get my grass cut and then the next thing you know it its dark.

AS: My composition was first and the light sequence had a huge impact on the form of my piece: like the light, I knew it had to be subtle and the pacing was really gentle. And there’s this illusion that happens with the oculus, like Travis was saying, where the sky looks green, and you know it’s not green, but it appears that way because of the color framing it.

AS: Yeah, there’s moments where you can’t imagine that what you are looking at is the sky.

TW: There’s a real form to it. There’s things that happen in a particular order, it’s the same every night, but just like an almanac, the timing is slightly offset each time.

BM: Almanac is a great way to put it.

TW: Landmarks, who commissioned the piece, have this big spreadsheet of when it starts every day, according to the sunrise and sunset, for ten years.

BF: For my composition, which is the last, I was working with the relationship between pitch and color. I paired certain colors with certain pitches, and that meant that particular shades or combinations of colors would then be a combination of different pitches, and these created different moods. And because part way through my piece, the sun has set and it becomes completely dark, there’s a switch that happens. We didn’t want to use stand lights for the performers’ music, because we didn’t want them to interfere, so we were dealing with the available light provided by nature and James Turrell. In my piece it’s dark for a good portion and the LED’s become very dim, so my instructions to the musicians were: “when you can’t see the music remember as much as you can about the music in the previous section, and use that as the basis for some improvisation.”

AGR: It’s actually a beautiful expression of the idea of improvisation, because that is something that always draws inspiration from darkness.

TW: Yeah. And we didn’t really coordinate a lot in advance in terms of what we were going to do. When we’re all working on projects we tend to work solo and are pretty tight-lipped about our processes.

AS: Well, we talk all the time incessantly over email but not about the music. We are supporting each other get through it by talking about other things.

TW: One thing that was striking to me was when we went through the first rehearsal, hearing everything for the first time, we realized that without ever coordinating, we all came to the same conclusion that “this is the sound that was called for in certain situations.”

BF: We’ve just known each other musically for so long.

TW: Somehow in each of our pieces we all ended up writing in a tremolo on the bridge which creates this white noise sound which is an odd thing to have all three people do without deciding it together. That’s just what the space called for I guess.