In March 2017, University of Texas at Austin art history graduate students, Jessi DiTillio, Kaila Schedeen, and Philip Townsend, formed the curatorial-focused Neon Queen Collective. Coming from different areas of research and curatorial practice, the collective was a way to formalize their shared goal of producing exhibitions that provide a platform for female-identifying artists of color and their allies. Their first exhibition, Notes on Sugar, profiles the work of Afro-Cuban artist María Magdalena Compos-Pons, whose work has not been exhibited in Texas since the early nineties. The exhibition runs from January 25- May 5, 2018 at the Christian-Green Gallery, part of UT’s John L. Warfield Center for African and African American Studies, with an opening reception on February 2 at 5:30pm. Fusebox artistic director Ron Berry and curators Betelhem Makonnen and Anna Gallagher-Ross sat down with the Queens to chat about working and curating collectively.

Kaila Schedeen: The idea came from a call I saw from the Visual Arts Center at UT for open proposals to do a show. We are all working within an academic setting and have backgrounds in curation and are interested in the ways curating can reach people in ways academia cannot. It allows for a lot more experimental processes and the development of relationships. I approached Philip and then we felt a third would be a magical number so we invited Jessie to join, and it’s been the perfect blend of each of us having different strengths. So it started in March 2017 and we’ve grown since then. Philip suggested us doing this project on María Magdalena Compos-Pons and so that’s where we began.

Jessi DiTillio: And we just started meeting at coffee shops and talking about all our fantasies as a curatorial collective. We spent the first month just shooting names at each other. We were going to be called “Ladies Night”…[laughter]

KS: We all share the same advisor, Dr. Cherise Smith, and so that’s how we are connected. Some of her previous students formed a collective called INGZ which has been quite successful, and so we were using them as a model, thinking about how we could build on what they are doing in our own way. We also thought of using our last names which would make “STD”! [laughter] These names got us thinking about what the core goal was as a collective and what kind of affect we wanted to bring to the work we are doing, and humor is a big part of that.

Phillip Townsend: We also had complex issues that we wanted to talk about and Neon Queens seemed to be the perfect thing that softens the blow in dealing with dark issues such as slavery and genocide.

JD: And as we started figuring out who we were and who we wanted to be; originally we were just thinking we were going to curate women artists of color but we realized we wanted to move beyond gender binaries, and so Neon Queen seemed a great name for embracing a range of gender identities across the spectrum.

KS: Our core interest is making work that actively supports female-identified artists of color, but we are also interested in including allies. We don’t all necessarily research female-identified artists of color, we just see a void in the field, and so want to create a platform that supports that work actively. I personally study contemporary Native American art and the African diaspora, and considering all of our interests, we felt there was an urgent need.

JD: We are all studying contemporary art, all studying critical race theory, that’s the intersection point for all of us, in terms of our political priorities.

Anna Gallagher-Ross: Could you tell us about the impetus for this first show? 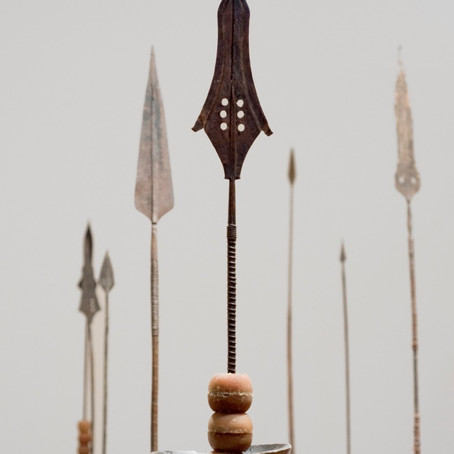 PT: I met Magda while I was doing graduate work in Florida and worked with her there. As a collective we were thinking about what is happening right now globally, in the US, and these things are so embedded in her work—

JD: —International immigration to the US—

PT: African Diasporic displacement, what’s happening in Syria and other countries. And we thought: the underlying thing here is displacement. Her work, which talks about the legacy of the sugar trade and the slave trade, articulates this displacement.

JD: There’s something really evocative about sugar as a symbol—it’s something that we all have in our lives, it’s innocuous and sweet, but we also know it’s really bad for us. It’s an addiction, but also has such a dark historical legacy. So this was a really rich area to explore. And in the central piece of the show, Sugar/Bittersweet, Compos-Pons looks at the relationship of sugar to color and racial stratification, and uses these different layers of refinement of sugar in the installation—there’s dark, black molasses; there’s a type of sugar that in Cuba is called “mulatta sugar,” and then there is white, the most “refined.” These become symbolic of the legacy of racial separation in Cuba. In some ways Cuba has this image as a racial utopia, and they want to promote themselves in that way, and when you look at it historically sugar relates so much to colonial power and slavery and how different slave populations were treated in Latin America as opposed to the US.

KS: That narrative has become increasingly important for us to think critically about in the US. We are in a moment, and arguably always have been, in which segments of the population try to promote the idea that we live in a racial utopia, so how do we shine a light on the fact that racial segregation is alive and well?

BM: It’s all about who is representing or speaking about the Utopia. It’s always about who is telling the story.

AGR: What does it mean to work collectively as curators? Collective curating seems to be having a bit of a resurgence, perhaps in reaction to the kind of culture of the “rock star curator.” And in this moment, it feels politically important that you are thinking about this work collectively. Could you say a bit about that?

PT: For me, one of the key things about being in a collective with these two is that we all have different strengths and it’s a way for me to train, because I’m immersed in learning from them. Collectively, you can create a richer, better project. Instead of one set of eyes, we have three.

JD: All the writing we do that is public facing, we have a collective Google drive and we all read and edit things together, it’s important that all our voices are involved.

KS: All of our eyes have to see everything, which means we can all stand behind what we are putting forth, but it also shifts our relationship to time and deadlines. We consistently meet or talk, every week, and discuss our priorities and how to bring together our collective visions into one curatorial vision. Because of our central aim, we are against the idea of being the “rock star” figures of curators who produce shows. We are working collectively to provide a platform for an artist to share their work and their message.

JD: When we were talking about the name, Neon Queen, we were like “who is the neon queen?” Are we the neon queen or is there a higher neon queen we are all making sacrifices to? As we work, we call each other queens, but everyone’s a queen, Magda’s a queen, all our supporters are queens, anyone who gets involved with us are queens.

KS: It’s also about empowerment. As students, there are not many opportunities to do these kinds of projects so I like the fact that maybe we can help empower others around us to and empower artists to put their work out there in whatever ways they want to.

BM: You’ve talked about the positives. What about the negative aspects of working collectively?

KS: Communication is the struggle. It’s like a relationship. We all are working on different aspects of the project simultaneously, so meeting weekly, staying in touch is so key but is also a struggle. We also all have our priorities as students outside of this work, and so the deadlines are constantly shifting too.

Ron Berry: To me what’s so wonderful about a collective is its still honoring point of view but also getting at a plurality. It’s also its about your relationship, and combining those things in a way that makes sense to you.

JD: We also try to honor each of our individual work. On our website we talk about our collective projects but we also talk about each of our own endeavors, whether it’s a show I’ve curated or a show Philip curated, and we have a blog that we each contribute to individually. We see the collective also as a way to amplify both projects we do together but also things we are doing individually.

PT: I think it’s more like a support group, we are nurturing each other’s ideas as opposed to trying to find consensus or agreement about a particular issue. This happens to be a project that I’ve been thinking about so it centers largely on my work, but the next project may be more focused on Kaila or Jessi.

KS: We also realize there are certain moments where we prioritize. We think it’s unrealistic to think it will be a democratic process that we’ll all be putting in the same amount of work all the time. We can’t always take 33% of the work every week, so we have to try and make it balance out in the end, and we’ve had to be good at communicating about that.

JD: We try to never be passive aggressive, we try to get it out there and out of the way so there’s no resentment.

PT: You can work with friends; it can be done!

Photo Credits (in order of appearance):