Elizabeth McDonald Schwaiger and Seth Orion Schwaiger are Austin based artists and also husband and wife. Elizabeth incorporates sculpture and other media in her practice often presenting her work as a broad but interrelated series. Seth is a sculptor who employs a wide range of material in his work, often incorporating video, photography, drawing and performance and frequently involving architectural interventions with the gallery space itself. Both artists’ work have been exhibited in Glasgow, London, Berlin, New York, San Antonio and Austin, among other cities. This is an excerpt from a car ride conversation between Elizabeth and Seth concerning their collaborative exhibition, you i i i everything else at de stijl Gallery in Austin, Texas 7 October – 16 December, 2017. 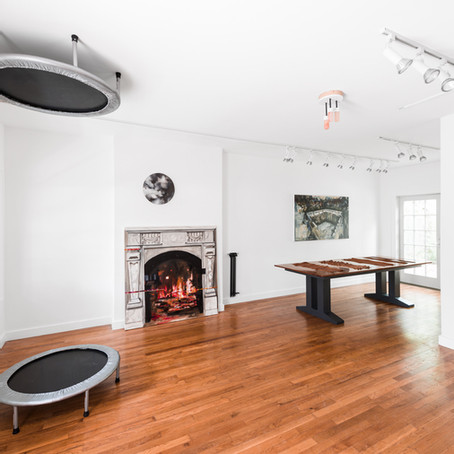 S There’s sort of no escape, right? Because you’re collaborating with the person closest to you, the person you live with, the person you share meals with, the person you are sleeping with. You can never escape the project. The only way to survive was to do this suspension of reality where you get home and you just pretend collectively that you’re not actually collaborating. It was necessary to push all that stuff away especially on the harder days, even if it was a fiction, an agreed-upon shared delusion.

E Shared delusions are such a strong part of the show itself don’t you think?

S Yeah, I don’t think I’d have used those words before but it’s true. The safety and the comfort of delusion where it’s like, you know, the fundamental core of yourself knows, that really none of these precautions, none of these apotropaic measures are doing anything at all. It’s just something that can keep your mind busy enough to not just stare directly into the problem and lose yourself.

E Sooooo, it is like pretending, maybe, but it does actually work sometimes. To me the apotropaic things in the show stopped being about warding off evil and more about warding off that outside pressure. Even the gesture of the hand is sort of like “fuck off” but of course also a ward against evil. Part of me likes to think that it still works in both respects.

S Maybe it works sometimes. For brief moments it actually feels like it does. Now the question is whether those moments are real or whether they’re just part of that delusion, or if that delusion is actually what you might be after anyway — a spiritual and emotional Placebo.

E That really relates to the starting place for the show. We were looking at social psychology, biopolitic (still hate that word), and other ways in which society’s behaviour can be understood and influenced.

S Yeah. That’s the bridge, right? Between the idea of the gallery as a mental space, like an analogy for the architecture of the mind, and the exhibition being an actual home and the work being examples of the strange tricks that could actually be protective, how art plays into that, and how the visual can prime the mind of a person within the home as well as those external to it.

E And there was plenty of our own psychology we had to navigate in order to get there. Once we found a rhythm, I really enjoyed coming back to a piece and it being changed while I was away from the work, like it was growing on its own. The paintings went so much faster than usual for me, but what I really loved was being able to come into your studio and stack things up. You used to hate that, but I love it, very much. And this was a very good excuse for me to do that. You were finally getting into my stacks and would respond to them. It would turn out being a better sculpture for it, and you could add the level of polish which would raise the sculpture to your sensibilities.

S It’s just so different than our individual practices. Both of us are very egotistical people. I think we are nice people, and some folks don’t recognize how egotistical we are because of that. But I think we use ego as fuel for our own work. There’s this idea that writing a novel is an incredibly arrogant act, but I think making visual art is even more arrogant, like how you think you can make this perfectly useless object and say that it’s worthwhile for some reason just because you made it? Because you have the keys to beauty and understanding that other people don’t?

E I have the keeeeys!

S It’s incredibly egotistical. So for us to go into this collaboration like this is ME, everything I make is ME, it’s insane. It’s such a terrible idea. And so to do that there was a lot of gnashing of teeth and restraint keeping our egos on a leash and making room for the other person, you know? So there were pieces that were big struggles all the way through. But after figuring out how to make that room there were other works that we’re so much fun to make with you.

E The more improvisational works were certainly the most fun for me, things that neither one of us would feel confident enough doing on our own, but with the other’s support and excitement, these strange objects or object arrangements went from visual jokes, to being important, to finding a place. Strange moments like the trampoline on the ceiling, or the multiplying barnacle-like smoke detectors, or the plant on a plinth with a penis…

E Shut up. Those works put the beefy anchor works full of gravitas into perspective. It’s that kind of balance, and that kind of actual, legitimate enjoyment in art making that makes this seem doable again, not just doable — not even just desirable — but inevitable.

Photo Credits (in order of appearance):

-you i i i everything else at de stijl gallery (installation view). Elizabeth McDonald Schwaiger and Seth Orion Schwaiger. Photo by Colin Doyle.

-you i i i everything else at de stijl gallery (installation view). Elizabeth McDonald Schwaiger and Seth Orion Schwaiger. Photo by Colin Doyle.

-balls have zero to me to me to me. Elizabeth McDonald Schwaiger and Seth Orion Schwaiger. Photo by Colin Doyle.