In 2015 Southern Methodist University (SMU) Meadows School of the Arts launched a new initiative called Ignite Arts Dallas. The program focuses on the intersection of arts and community engagement between Meadows School students, the wider SMU campus, the city of Dallas, and the arts field nationally and internationally. Ron Berry talked to Clyde Valentín, former executive director of the New York City-based Hip-Hop Theater Festival and inaugural director of Ignite Arts, about the organization’s mission and the incredible range of programming and community partnerships it sparks within and beyond the walls of SMU. 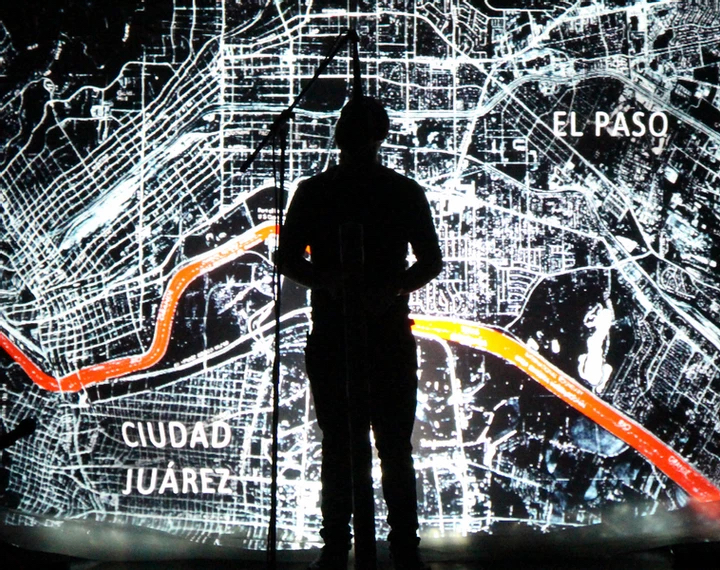 Ron Berry: Can you tell us about the program, the center, and the work you’re doing there?

Clyde Valentín: I was hired as the inaugural director of Ignite Arts to come in and give shape and strategy to an idea and an aspiration: to create more interdisciplinary opportunities for our students while creating stronger inroads and relationships across the city of Dallas. It’s an initiative for people, purpose, and place. We start with people, our students and the members of the communities we’re working with. We then focus on place-making, which means that we try to be as intentional as possible about where we are working and why that particular venue for that particular artwork or project. And finally, we think of art as serving the greater purpose instead of just “art for art’s sake.” It’s about filling a different sort of niche, which arguably does not quite exist in other places, on other stages. From our perspective it’s about trying to make culture.

RB: How has it worked with the community aspect so far? I know “community” is a complex word…How are you going about that work?

CV: The first thing we did was think about the word in plural and acknowledge that there are multiple communities in our minds: there are the students in our arts school, there’s the campus at large, there’s the city and its many neighborhoods, and then there are regional and national communities we want our students and artists to be a part of, and vice-versa. So there’s a multi-directional nature to these relationships. At the beginning of this program, we spent our first eighteen months articulating that theoretically and coming up with a concept and strategic plan and now we’ve started putting it into practice while learning what’s going on around town, seeing what’s happening, and understanding the policy landscape. I think part of understanding a place is to understand: what is the local funding landscape? What are the zoning restrictions for DIY spaces? Why aren’t there many more artist run collectives or mid-sized arts organizations in Dallas? Why do we have a large group of struggling small arts organizations, whether they are theatre companies or galleries or arts groups? It is important to understand this ninety-nine percent, one percent reality that’s created by all these larger, richer organizations.

In doing this work it’s also important to understand the municipal culture and how the city itself formed. I have a colleague here, Thomas Pearson, who is a native Dallasite, a historian by training, and who used to work with a local community design firm here called buildingcommunityWORKSHOP. He also had an appointment with the city running their design lab where he’s helped to introduce design thinking and design culture into some of Dallas’s city strategies, particularly looking at affordable housing and preserving communities. He gave me a bibliography about the history of Dallas, six or seven books to read, some of them telling the progressive Dallas narrative, others more critical. You get the full scope of the place when you study its formation and the culture that helped create it. Then you see things playing out that look a lot similar to how things played out in the 1930s, or how things played out around the creation of the airport. So you ask: what has changed and what hasn’t? The dominant narrative is that Dallas has undergone incredible change in the last 10 years—you can go to any city in any state right now where they’ll say the same thing—and it’s changing so much, and we know that these cities are going to keep growing over the next thirty years.

The other interesting thing I started accessing was geography in Dallas. Growing up in New York City, for me geography was blocks and avenues. You would cross this particular avenue or street and the geography would change so quickly, might be building structures, might be moving from the Upper East Side to East Harlem which is one of those dramatic shift points, and it used to be that you would turn a corner and you’d be in a whole other world. Over time NYC, like a lot of other cities, has become more homogenous so those contrasts still exist but are a bit less stark. With Dallas, still, you can go ten minutes south from downtown and be in a whole other world and be in a rural part of the state, and that’s been the big focus from a policy perspective and from a development perspective: the acknowledgement that the vast majority of the growth here over the last 40 years has been in North Dallas, into Richardson, into Plano, into Frisco, or Northwest into Irving and Arlington. And these neighborhoods that are south of downtown are divided by the Interstate 30 Highway and the Trinity River which both stretch east to west, which act as physical barriers on top of the racial and cultural dynamics, and has made it easy for those in a position of power, who decide where things should go, to just look north versus south, and literally turn their backs on these neighborhoods.

So one of things I knew we needed to do as an organization was not not to buy into that particular perspective, and have our initiative commit to multiple places across the city. That said, I could have easily said “OK, our focus is exclusively on South Dallas,” but instead I 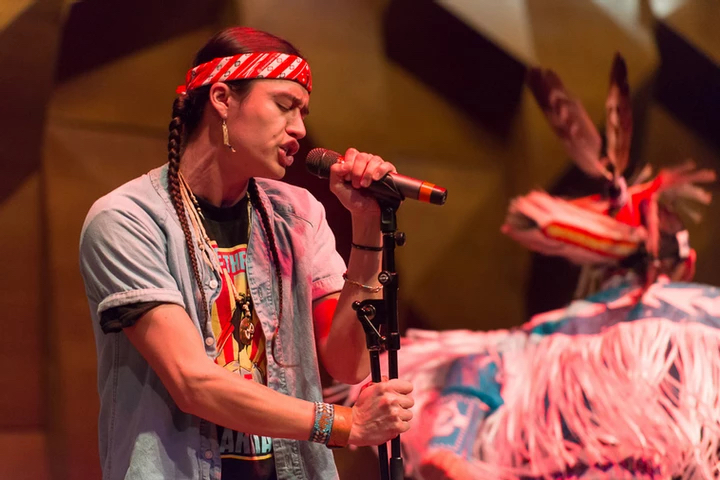 thought, what would it look like to be “all-city”? How can we, as we learn about the vast geography of our city, develop community relationships all over the place, in ways that make sense, that connects to communities, and is rewarding to them? To give you an example: I’ve been working with the folks from American Indian Heritage Day of Texas, and specifically Jodi Voice, who is one of the organizers of that event. I approached her with the idea of working together to bring in Frank Waln, who is a young MC from Rosebud Reservation in South Dakota who performs with two traditional dance from the Mohawk Nation while he rhymes over music he produces. I asked Jodi, “Would it be interesting to have Frank come out here?” and she said yes. And that was the approach to working with the urban Native American community in Dallas, who is not one tribe but a diaspora who relocated here, and working with Frank Waln was an opportunity for the young people in that community to take the lead and work with the elders in a very different way. And what we made in the week Frank was here was pretty incredible and culminated with a performance that was part of Annual American Indian Heritage Day event in September. That was our entry point into building that relationship and that first collaboration is only going to lead to more. Now those folks come out to things we invite them to, and vice-versa, and I think that’s part of what we’re trying to create.

In another instance, when we brought Theater Mitu out here from New York to do Juárez: a Documentary Mythology, we were was working with Cara Mía (a Dallas-based Latino Theater Company) as a co-presenter, and using the Latino Cultural Center, and that space just made sense: it was downtown, Cara Mia was able to build it into their season, and since Rubén Polendo (artistic director of Theater Mitu) teaches at NYU, we were able to connect Mitu with our students on an academic level, to introduce their work as an ensemble-based company. So we had some really great aesthetic conversations and learning around their process and their methodology, and then we were able to put that show up and have an incredible conversation about the Texas-Mexico border in Dallas. And we learned from the conversations around the show that we might be living 8-10 hours from the border but there’s so many people here who are from Southern Texas and who have lived that experience and were moved profoundly by that story.

And with all of these community collaborations, another part of the strategy is that I want people to find out that SMU is behind the event after the fact. I don’t want to put our name out at the front end because it could lead to it being dismissed immediately. If we’re going to change culture and change our institutions relationship to the city, we have to hack the existing notions of what we’re about. Because we represent a hundred years of exclusion and class issues, and that stuff is real, and it’s still around us. So that’s also been a success point, when people, after the fact, perceive SMU differently. With all of these relationships, I’m trying to not just parachute in, say thank you, and move on, but rather I’m trying to do my best to maintain those connections in real, authentic ways. And even if we can’t always do something, that doesn’t mean we won’t show up to something, it doesn’t mean we won’t find a way to support each other.

RB: I love that you intentionally don’t have a permanent space, so any time you do a project you initiate an act of collaboration, which I think is so beautiful and so smart.

CV: It’s how I’ve learned to do things. At SMU they already have such a full performing arts season of student work, and with that knowledge, I started to seek spaces elsewhere. I think the first time I asked our production management office for anything it was for stuff

to make a green room in Fair Park for the show Beware of the Dandelions by Complex Movements. I asked for a fridge, an ironing board, and she was like “that’s all you need?” and I was like yeah, and she was like “You got it.” (Laughs) If you’ve been to the State Fair Park in Dallas, you’ve probably been to the food court. The Tower Building there was where we built the show. And because it’s already a ruin, we were able to light it in a way that accentuated the distress of the architecture itself so we played with the idea of a temple, and ritual, and going back in history in order to realize your present, which is part of the narrative of Beware of the Dandelions. And it’s several thousand square feet, of which we only used four thousand, so we had dirt bikes getting us from place to place. We lived in that space for a month which was pretty incredible.

At SMU we’re in a place with an existing culture, a place which has a rhythm, a packed season from Theatre and Dance, we’re renovating a space, and when you wedge something into an existing culture it gets more complicated: it’s not negative, but you notice the extra presence. And even when we’re in that building, we’re not trying to program a traditional season in Meadow School of the Arts. We operate outside of the traditional black boxes and prosceniums and use spaces that provide more flexibility. We’ve used the gallery space as a lecture demonstration space; we’ve used an atrium as a cabaret space and all of this has affirmed to me that always looking outwards instead of trying to fit within was better for the organization in realizing our mission.