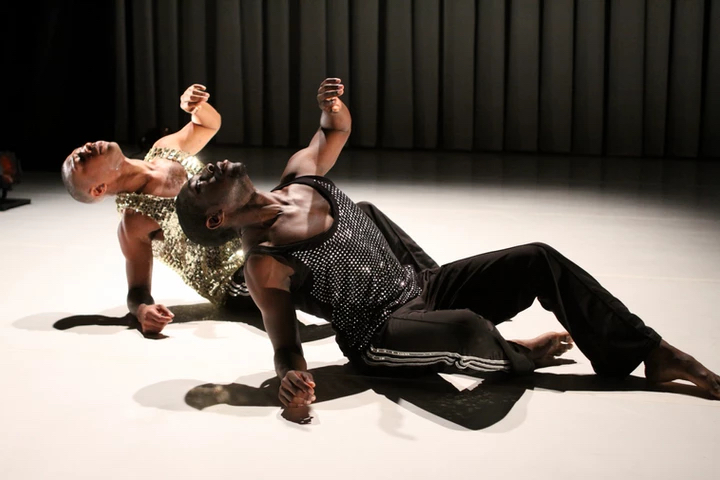 Kyle Abraham is a choreographer, dancer, and artistic director of the company Abraham.In.Motion. His body of work reflects his diverse training in classical music, visual art, and multiple dance forms from contemporary to ballet to hip-hop. A recipient of the MacArthur “Genius Grant” and one of Dance Magazine’s “25 to Watch,” Kyle took the contemporary dance world by storm back in 2010 with the award-winning Radio Show, one of his many works that explore the relationship between personal history and identity. On September 29 and 30, the Abraham.In.Motion ensemble will visit Austin for the first time to perform Live! The Realest MC thanks to our friends at Texas Performing Arts. Inspired by the iconic childhood character Pinocchio’s quest to be a “real boy,” Live! explores gender roles in the black community and the quest for acceptance in the world of hip-hop celebrity. Fusebox artistic director Ron Berry and curators Anna Gallagher-Ross and Betelhem Makonnen caught up with Kyle to talk about the origins of Live!, how he builds movement, and what it means to develop a dance work over time.

Anna Gallagher-Ross: Could you talk about the origins of Live! The Realest MC?

Kyle Abraham: This show is in some ways an extension of two early solo shows of mine called Inventing Pookie Jenkins (2006) and Brick (2007). These shows looked at the construction of black male masculinity and sexuality, and my high school experience, which was a period when I was trying more than anything to blend in, to change the way I walked or talked, to go unnoticed. This exploration made me think of the Pinocchio story and his quest to be a real boy, which I wanted to look at through a hip-hop lens. I was also thinking about this idea of being an MC because so many of the guys in my high school would walk down the hallway reciting rap lyrics, and they looked so cool, they seemed untouchable. And I remember being in art class in high school and one of my friends starting to recite a rap song, and I knew all the lyrics so I chimed in and performed it, every little moment, and my ability to do that instantly made me more accepted…for better or for worse.

Ron Berry: Do you remember which song it was?

KA: It was either “Dig It” by The Coup—I don’t know if y’all know The Coup, but they’re known for political rap songs—or it was something by Digable Planets.

AGR: Could you talk about how you’ve adapted the Pinocchio story and what it means to “be a real boy” in this context?

KA: It’s not a literal interpretation, but takes a lot of inspiration from it. The show starts off with me being born, almost in a dazed Bambi 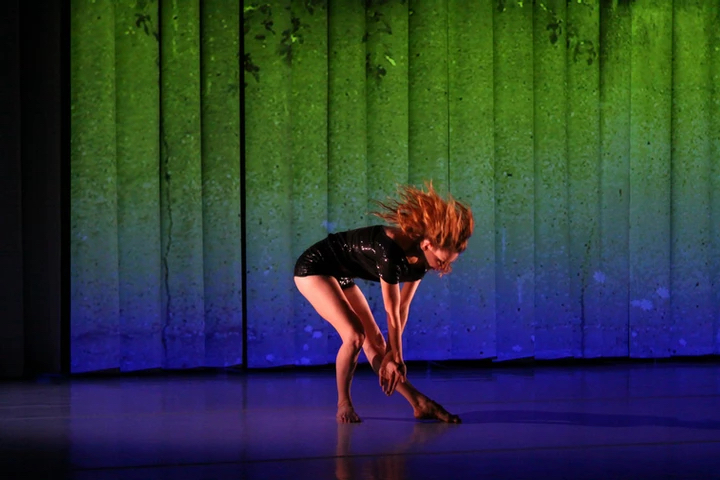 sense like when he’s trying to find his legs and figure out how to walk and stand. I’m learning how to move and walk and all these things but set against the backdrop of these industrial sounds and this factory vibe, which draws on my experience growing up in Pittsburgh with all these steel mills. And this story has a lot of darker tones to it and there’s a lot of layers. There’s a lot of playing with what it means to be a real man. It’s an exploration of identity and also questioning who owns hip-hop culture. The show features these instructional videos called “Hip-Hop Moves for Men,” with these guys that teach you these moves specifically for men. We use both the video and audio, but sometimes isolate the audio or the video on its own, and stripping these instructional videos down in this way makes you think, does this movement really make you more masculine? More of a man? So we’re playing a lot with how things are heard and interpreted, and lived in and owned.

Betelhem Makonnen: I’m interested in how you introduce a dystopia into the fairy tale. Our reading of Pinocchio is that he aspired to be a little boy and then becomes a little boy—it’s supposed to be a fairy tale dream fulfilled. So how do you problematize that with the dystopian background you’ve created?

KA: I’m not one for a happy ending in dance. Although, I like to end a lot of works with a little bit of abstraction so that some people can see hope, some people can see despair, some people can see it as a way of approaching a coming to terms. At the end of what we consider to be the first act, the Pinocchio character has been beaten and is laying next to another male figure, who by act two, has begun to own his identity. In some ways it’s an homage to all of those who died so that a lot of people in the queer community and this world can express themselves more and more freely. You see the one who has been beaten try to fit in, and as they’re trying to figure that out a kind of breakdown happens. There’s this really emotional text spoken in this thugged out persona, and it goes in and out of that voice and a more innocent voice telling the story of being assaulted for who they were and for holding hands with someone else. I don’t ever say the gender of the person he was holding hands with but that omission is so relevant. In terms of a movement conversation, I don’t usually use the language of “masculine” or “feminine” when I direct; I always say “hard” and “soft,” and people can attach whatever gender they want to that. And the figures onstage are living and moving in the most exuberant sense of hard and soft.

RB: Are you performing in this piece?

KA: This is the first time I am not performing. Jeremy Jae Neal will be playing my role.

RB: And when did you make this piece?

KA: It premiered in 2011 at the Kelly-Strayhorn Theater.

RB: How does a work like this piece that you made in 2011 sit with you today? Has your relationship to it changed over time?

KA: It’s kind of a weird thing. Part of the thing with this work is that it’s kind of like the middle child because Radio Show (2010) was the first show we did and we won a Bessie for it, and it got us a lot of attention, which was exciting. And at the time I was also making Pavement (2012) and because of the funding I received for that, and the attention for that, Live! got lost in the shuffle a bit. It’s so wonderful to be doing it again now and interesting to look back on it and not be in it—I can actually think about it in different ways, and try things I’ve always wanted to try. And the dancers look awesome in it. We did it in 2014 in D.C. and Michelle Obama came—that was really awesome.

AGR: For audience members who are meeting your work for the first time, could you talk about your influences coming up in dance, and the range of movement styles and vocabularies that you are immersed in?

KA: I was a big rave kid in the rave scene, and growing up in the hip-hop age made me go dance at hip-hop parties a lot and this was well before whatever would qualify itself as dancing in a classroom. I started taking dance classes when I was 17. I began with jazz, ballet, 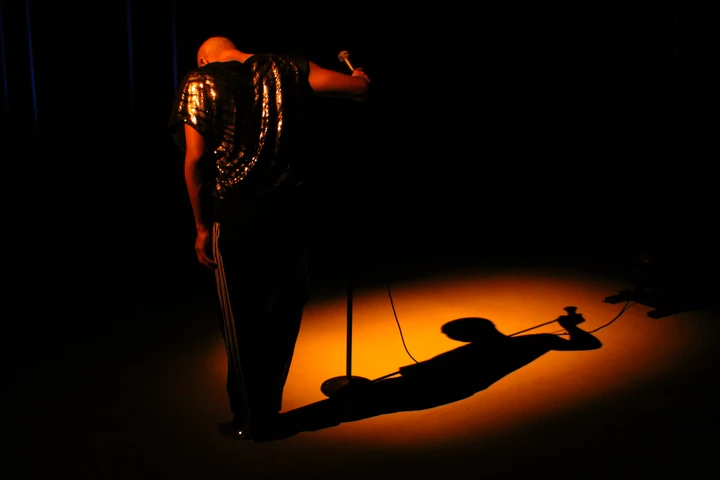 modern, and tap, just like people who start at any K-12 age. The thing that got me into dance was just loving movement, and all of these influences started to play themselves out as I continued to create and build movement, so by the time I got to SUNY Purchase, and was studying with people like Kevin Wynn or the Graham or Cunningham companies, I was soaking up all this movement, and all of it became part of the way in which I would explore movement-making. When I build movement now I’m not trying to be super formulaic about structures or when I’ll do x,y, or z; I’ll just start moving. And then when I break it down to my collaborators, I’ll tell them, okay this movement here is like a Graham spiral, this is like a Cunningham tilt line or curve—that kind of thing.

RB: Those become shorthand references in the process?

AGR: Is there anything that you’ve been thinking about recently that you’d like to mention?

KA: It’s great that this is the work that introduces Austin to our company. There was a period coming after Pavement, the work from 2014-2016 that I wasn’t as keen on, and I think a work like Live! is really showing a play between my solo work and group work and how they intersect, and my interest in identity and ownership and ways of looking at gender norms. It’s important to note that what some people see as terms, for people who live in that world or structure in some capacity, it’s a life, it’s a history that’s much more ongoing, and so it’s great when organizations such as Texas Performing Arts are interested in bringing a work in from the past that has a history, and still hopefully has a lot of relevance.

For more information or to purchase tickets click here.